In June 2017, I joined faculty from Union College on a study tour of Berlin, Germany. We attended lectures about global issues, sustainability and human rights. This included visiting numerous sites in East Berlin, including the Stasi Museum and the Stasi Records Agency.

Stasi background
The Stasi, or the East German Ministry for State Security or Ministerium für Staatssicherheit (MfS), operated from 1950-1989 and served as the official state security service of the German Democratic Republic (GDR), also known as the DDR. This secret police organization included professional officers and a network of citizen informants (Inoffizielle Mitarbeiter or IMs) who actively surveilled and documented the lives of East German people. Many IMs were former resistance fighters who were blackmailed by the Stasi to spy on their own family and friends.

The Stasi Museum
We started our tour at the Stasi Museum, which is situated inside the former Stasi headquarters building and compound. The museum retains much of the original 1960’s décor and once inside, visitors get a sense of what it might have felt like to visit Stasi headquarters in the Cold War era. The focus of the Stasi Museum is to address the question of ‘how the Socialist Unity Party (SED) managed to keep millions of people in East Germany under control for forty years.’ Educational exhibits and guided tours reveal methods of Stasi atrocities around espionage and surveillance through special cameras, bugs, burglar’s tools, and devices that secretly opened letters. 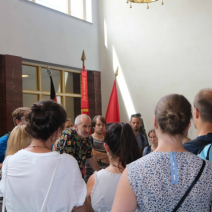 A museum guide discusses the history of Stasi operations in the former East Germany. Exhibits are located inside former offices and retain the look and feel of Cold War architecture. 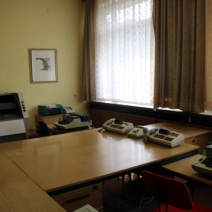 The Stasi Records Agency
When the Berlin Wall fell in November 1989, the East German regime went with it. Although the Stasi dissolved in January 1990, it was between these two events that Stasi authorities ordered the destruction of thousands of personal files that had been gathered by surveillance and informants. The Stasi packed bundles of files into large paper sacks and shipped them to nearby incinerators and shredding plants.

Concerned East German citizens witnessed these activities and began protesting the removal or destruction of the files. This act of defiance was an important step for many East German residents to collectively resist the authoritarian DDR dictatorship that had controlled them for more than four decades. This resistance led to the passage of the Stasi Records Act of December 1991, which created the Federal Commissioner for the Stasi Records or the Stasi Records Agency (BStU) to safeguard and preserve the files for the public. By 1992, East Germans could apply to view their own files for the first time ever. Although the files are restricted, researchers may apply to the BStU for access. In addition, scholars and journalists may use them to study the history of the DDR.

The Stasi Records Agency archive is also located inside the former Stasi compound. We entered the facility through an innocuous basement door located next to a parking lot. Guided by two BStU employees, including Susan Ludke, Chief Information Officer, we were escorted through a narrow hallway onto a secure elevator that took us to an archives research room containing thousands of typed 5×7 index cards.

The index cards show categories such as name, date of birth, education, occupation, surveillance officer along with notes reporting illicit activities. A file number is stamped at the top and a handwritten archive number is listed separately. Because the Stasi files contain personal information, researchers are required to apply to the BStU beforehand to access the files.

After we saw the research room, the group was taken via an elevator to a large, secured climate-controlled room filled with files sitting on rows of compact shelving.

An exhibit in the stacks described efforts of citizen activists to rescue many documents shredded by the Stasi. Bags of shredded documents have been preserved with hopes of restoring these documents in the future.

After the tour I wondered why I found the Stasi Museum and Stasi Records Agency so fascinating and significant in the unification of Germany. Yes, it demonstrates the madness of massive spy operations and espionage in authoritarian regimes. But I was also struck by the power of citizen activists to save the archive from destruction. These efforts prompted a unified German government to pass legislation that ensured the Stasi files would be preserved for future generations. As an archivist, I’m moved by the power of the people to transform and save such an archive. They took an archive born of a dictatorship and transformed it into a valued public resource that is helping Germany heal its painful past.

For information about the Stasi Museums see: www.stasimuseum.de

For information about the Federal Commission for Stasi Records see: http://www.bstu.bund.de/EN/Home/home_node.html.

India is the Head of Special Collections and Archives at Union College in Schenectady, NY. She holds an B.A. from the University of Alaska (her home state), MLIS from UC Berkeley, and M.A. in Museum Studies from the Institute of Archaeology, University College London. She’s a member of the Academy of Certified Archivists and serves on SAA’s College & University Archives Steering Committee.